Why is the ANSI/PLATO FL 1 2019 Standard important?

Buying a flashlight, headlamp, bicycle light, or spotlight can be a confusing proposition to most consumers and many retailers, but the ANSI/PLATO FL 1 2019 Standard and PLATO are two key resources that provide clarity for buyers and accountability for the industry. The ANSI/PLATO FL1 2019 Standard, developed by PLATO, industry experts, and stakeholders, spells out specific testing and reporting methods for portable lighting products that emit directional light. If the ANSI FL1 icons are present on the packaging, consumers and retailers can be confident that the reported performance claims are tested to industry standards, and even more importantly, the consumer can compare “apples to apples” when evaluating different products.

How does PLATO uphold the Standard?

Who was involved in the development of the ANSI/PLATO FL 1 2019 Standard?

As an Accredited Standards Developer, PLATO is proud to have worked autonomously to revise the ANSI/NEMA FL1 Standard to create the ANSI/PLATO FL 1 Standard, which was released in October 2016. PLATO went through a similar process three years later and added area lights and published a revised ANSI/PLATO FL 1 2019 Standard. The Standard strengthens the portable lights industry by providing more credibility to those portable lights companies correctly using the standard and its icons. The ANSI/PLATO FL 1 2019 Standard was developed by the PLATO Standards Committee. At the time it was approved, the PLATO Standards Committee was composed of the following members:

What does each icon mean?

Below are the icons and an explanation of each specification. 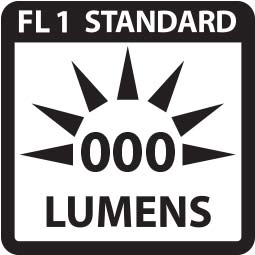 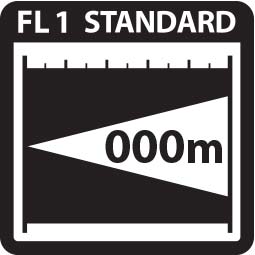 The distance, measured in meters, at which the light projects a useful amount of light, measured at 0.25 lux. (0.25 lux is approximately the equivalent of light emitted from a full moon “on a clear night in an open field.”) 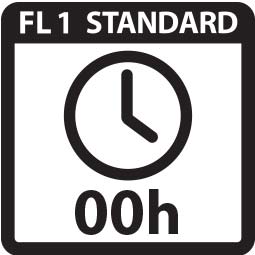 Tested with fresh batteries from 30 seconds after the light is turned on until the light output reaches 10% of the initial measurement. This is the total time of useable light before most consumers will change batteries. The brightest point in the beam was measured in candela. Candela is the modern unit of measure for light intensity replacing the now-obsolete unit known as candlepower. 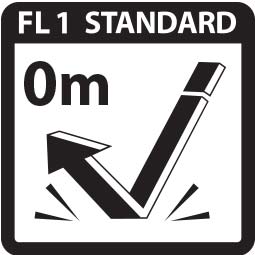 The height, measured in meters, from which the light can be dropped onto cured concrete and still work properly. This testing is completed by dropping the product (6) times using drop orientations that approximate each side of a cube. Dropped samples cannot have any visible cracks or breaks and must remain fully functional. The product must meet a minimum of (1) meter to receive this rating.

This icon indicates an IPX4 rating which means the sample is tested against water sprayed from all angles. If this test is performed, it must be done after impact resistance testing is completed to ensure water resistance under real-life conditions. Water submersion depth rating, measured in meters. This icon indicates at least an IPX7 rating which means the sample is submerged to a minimum of 1 meter depth for 30 minutes. If this test is performed, it must be done after impact resistance testing is completed to ensure water tightness under real-life conditions.
PS: This is sourced from plato-usa.org