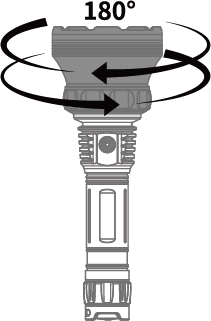 Memory Function
The flashlight has a memory function. When the flashlight is turned off, it will save the mode used before. Automatically light up with the saved mode when turning on the power.

Low Voltage Warning
When the battery is low, the power indicator flashes red light continuously 3 times per second, and the current working LED light flashes 3 times every 3 minutes. It reminds the user to replace the battery.

Low Voltage Lower Brightness Levels
When the flashlight detects that the battery voltage is lower than 3.0V, the flashlight will lower the current working mode until the LOW mode.

Protection for Limit Time
Brightness Level with time limit protection design. After working on the white light TURBO level 2000 lumens/red light HIGH level 400 lumens for 60 seconds, the flashlight will lower automatically to 800/200 lumens to avoid overheating. Then it will adjust the brightness according to the temperature security.

Temperature Control Protection
The product temperature is higher than the safety value will reduce the product brightness through temperature control to avoid product damage and injury to the user.

Ask For A Wholesale Quote

We will contact you within 1 working day, please pay attention to the email.